Nicole Livingstone – A Story of Resilience

Former Australian swimming champion and Medibank at Home customer, Nicole Livingstone, embodies a never give-up-attitude, in and out of the pool.

The past two years came with many challenges, both physically and mentally for countless Australians across the country, including much-loved former Australian Olympian, Nicole Livingstone.

Following an incredible athletic career, Nicole is now General Manager for the AFLW and one of the industry’s most successful ex-athlete presenters. With these accolades, it would be easy to assume that there is no challenge too big for her to handle.

However, while most of her athletic career was injury-free, last year Nicole underwent two partial knee replacements at the age of 49. Nicole was faced with incredible uncertainty in her physical mobility and her resilient mindset was going to be more important than ever before.

“To go through an entire athletic career without serious injury, only to tear the meniscus in both knees in my forties was certainly confronting,” said Nicole.

To understand her never-give-up attitude, we need to look at her incredible life journey as one of Australia’s most revered sporting stars.

The youngest of three children, Nicole was just nine years old when she watched her first Olympics on TV – deciding she too would compete one day, she immediately enrolled into swimming training. With incredible determination, Nicole managed to make the Australian senior team just four years later, at age 13.

After representing Australia at three Olympics and winning multiple golds at the Commonwealth Games, Nicole today still holds the longest title defence in the Australian National Title for 100m Backstroke – winning the event ten times during 1987-1996.

In addition to swimming, Nicole’s passion for AFL was also born in her childhood years – following her mum’s footsteps as a passionate Carlton supporter. This would soon see her make history again, being appointed the General Manager of Women’s Football (AFLW) in 2017, the first woman in charge of the sport.

Nicole has successfully paved the way for women in sport – not only normalising females playing Australian Football, but becoming the ultimate figure of inspiration for all females to be able to set their mind to something and simply, achieve it.

It’s this same mentality Nicole is seen registering in all aspects of her life – on and off the sporting field, that allows her to take control and apply resilience – something that needed to be particularly prevalent in 2020.

Fast forward to the present day, Nicole realised that for the first time, taking charge of her health meant having the courage to ask for help and rely on other people.

Through the Medibank at Home program Nicole began rehab, in the comfort of her own home.

Throughout the process, Nicole’s Medibank at Home physiotherapist, Megan, would visit her at home for a variety of physical activities and assessment tasks to track her progression on both knees.

Having three children remote learning, two completing VCE, Medibank at Home allowed Nicole to not only be more present during that critical time, but also allowed her children to be able to support their mum at home, too.

“While everyone’s journey is different, my tailored rehabilitation program allowed me to work-through my recovery in the comfort of home and surrounded by family,” said Nicole.

Whether it’s help on a maths question or taking mum for a walk to the oval – Medibank at Home provided the convenience and ease for the Livingstone’s to continue living their lives and not be controlled by the situation.

Since launching in 2016, over 20,000 members have experienced the convenience of in-home care with Medibank at Home.

While Nicole’s care at home will continue into the future with Medibank, like most of us, she’s most looking forward to a time where we can get on a plane and be able to travel.

Available for eligible members with hospital cover who have served all relevant waiting periods. Treating doctor must consider it appropriate. Additional treatment may incur out of pocket costs. Not available in all areas. 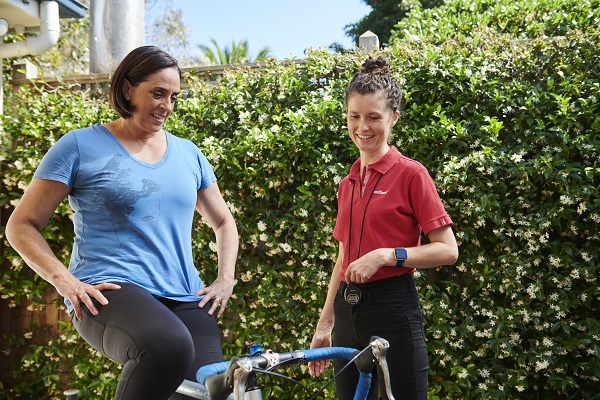 Medibank at Home allows eligible members to choose whether a treatment is delivered in the hospital or comfort of their own home. With their doctor's support and where clinically appropriate members can receive rehab, chemo, dialysis, infusions, heart health and palliative care at home.~

~Must have eligible hospital cover, all relevant waiting periods must have been served and treating doctor must consider it appropriate. Out of pocket expenses may apply. Chemotherapy, palliative and dialysis program not available in all areas.

Why does the cost of health cover go up every year?