Playgrounds for all abilities

What makes a good playground? We explore some outdoor wonderlands designed for active play, imagination and inclusion. 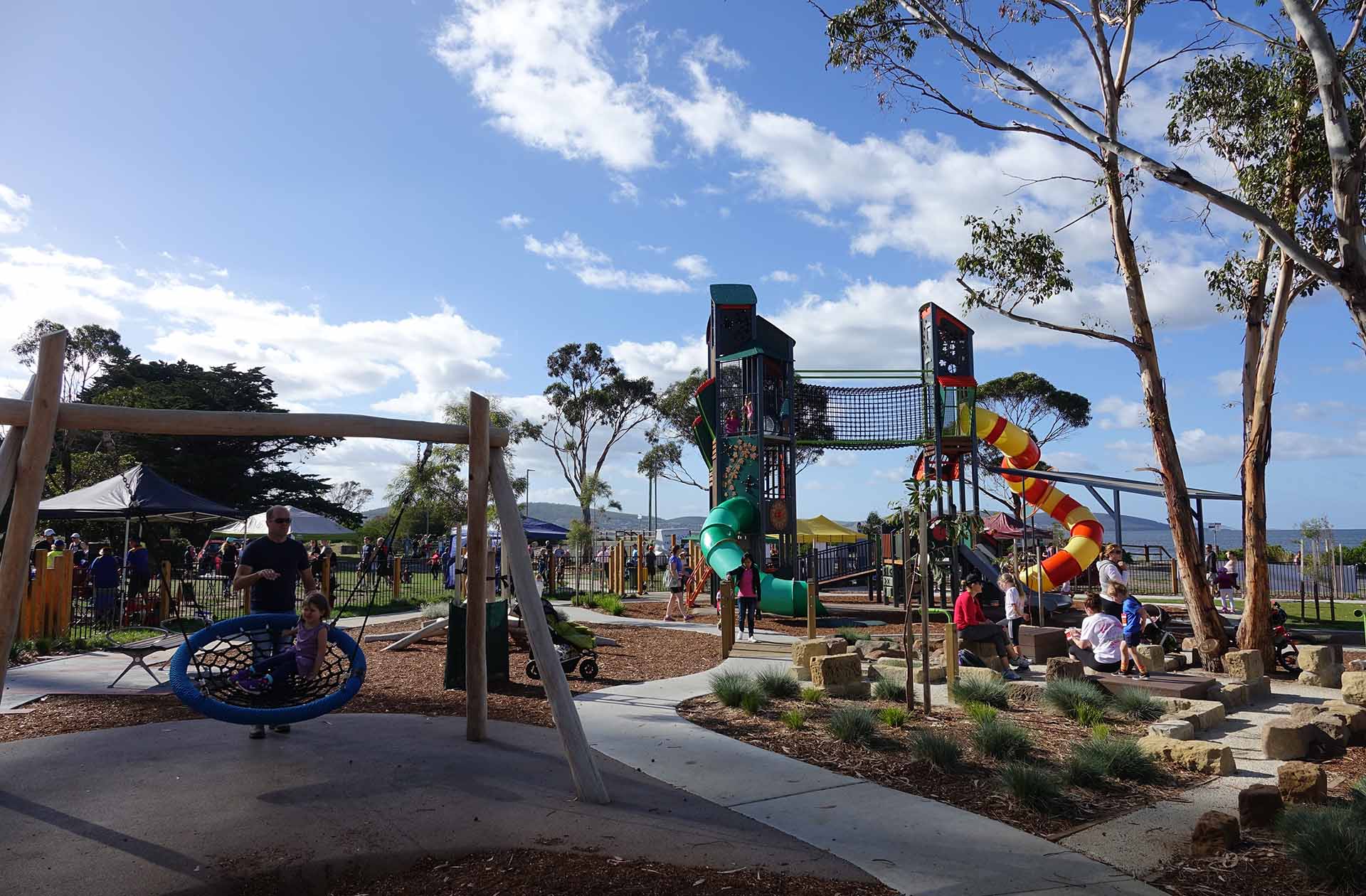 Gone are the rusty swings and rickety see-saws. The modern playground is a sensory wonderland that engages children’s minds as much as their bodies and welcomes people of all ages and abilities.

Kids squeal with delight as they hurtle through the air, seemingly on a collision course with their fellow parkgoers. This is not your ordinary swing set in any ordinary children’s playground. The recently opened Bellerive Beach Park All Abilities Playground in Hobart features a range of equipment designed to allow kids to experiment with risk and play in nature.

Rather than a linear swing set, where all the children face one direction, there are four swings hanging from a square structure, so the kids swing into the middle. You know that someone has done the maths and they won’t collide, but it’s still heart-in-your mouth viewing. The same goes for the two nine-metre climbing towers connected by a rope bridge, one of which can be accessed by children using mobility aids.

The park also features a river rock creek bed with a working dam, a wheelchair-accessible spinning carousel, balancing logs, a maze and a ‘cloud-gazing‘ lawn.

This is the new era of children’s playgrounds: creative outdoor spaces that harness the natural environment, encourage safe risk-taking and are accessible to people of all ages and abilities. They are emerging in Australian towns and cities as local councils recognise the power of the playground to promote community health and wellbeing, as well as social inclusion.

Mayor of Clarence City Council, Doug Chipman, opened the new Bellerive Playground. “Playgrounds are spaces for the community to get together and be active. That means happier, fitter people,” he says.

Mayor Chipman gives a lot of credit for the playground’s success to the hundreds of kids they consulted, including kids from kindergarten to 18 years, as well as children with significant and complex disabilities.

“They told us they wanted a playground to make them curious; they wanted it higher, bigger, faster, better. Risk is very important for children to learn and develop.”

It was also the kids who were responsible for ensuring the playground was just as enjoyable for their carers. “The kids were really clued in to the fact that if their parents and carers were happy, they could stay and play longer,” he says.

That meant making sure there was shade, barbecue facilities, comfortable seating with a good line of sight through the playground, and a coffee shop and toilets close by.

This careful thought given to all users is the cornerstone of great playground design, with three key questions to consider: Can I get there? Can I play? Can I stay?

Bec Ho is Executive Officer at Touched By Olivia, a charity that works with government and businesses, including Medibank, to build accessible and fun playgrounds for the whole community.

“There is no point having an amazing playground that people can’t get to because there is no parking nearby, or there is no public transport,” she says. “Once you’re at the playground, there must be something for all ages, for every kid.”

Ho says we can no longer accept the exclusion of some children from playgrounds as “just one of those things”. That includes children with physical disabilities, as well as those with autism and sensory issues. “The two most important things for kids on the spectrum are a secure boundary and retreat zones where they can get away from all the crazy stimulation.”

Ultimately, in a world where kids are increasingly glued to their devices, this new breed of playground is reawakening the senses, and reminding us that every kid has a right to have fun.

A few fantastic playgrounds around Australia

Written by Megan Tudehope
Megan Tudehope is a corporate communications specialist and freelance writer. She draws inspiration for writing from her daily life.

Easy (and free) exercise ideas for any space

Hiking for beginners: how to get started