USA: Where to visit and what to do

More than 50 states make up this diverse country, with every place offering up something unique 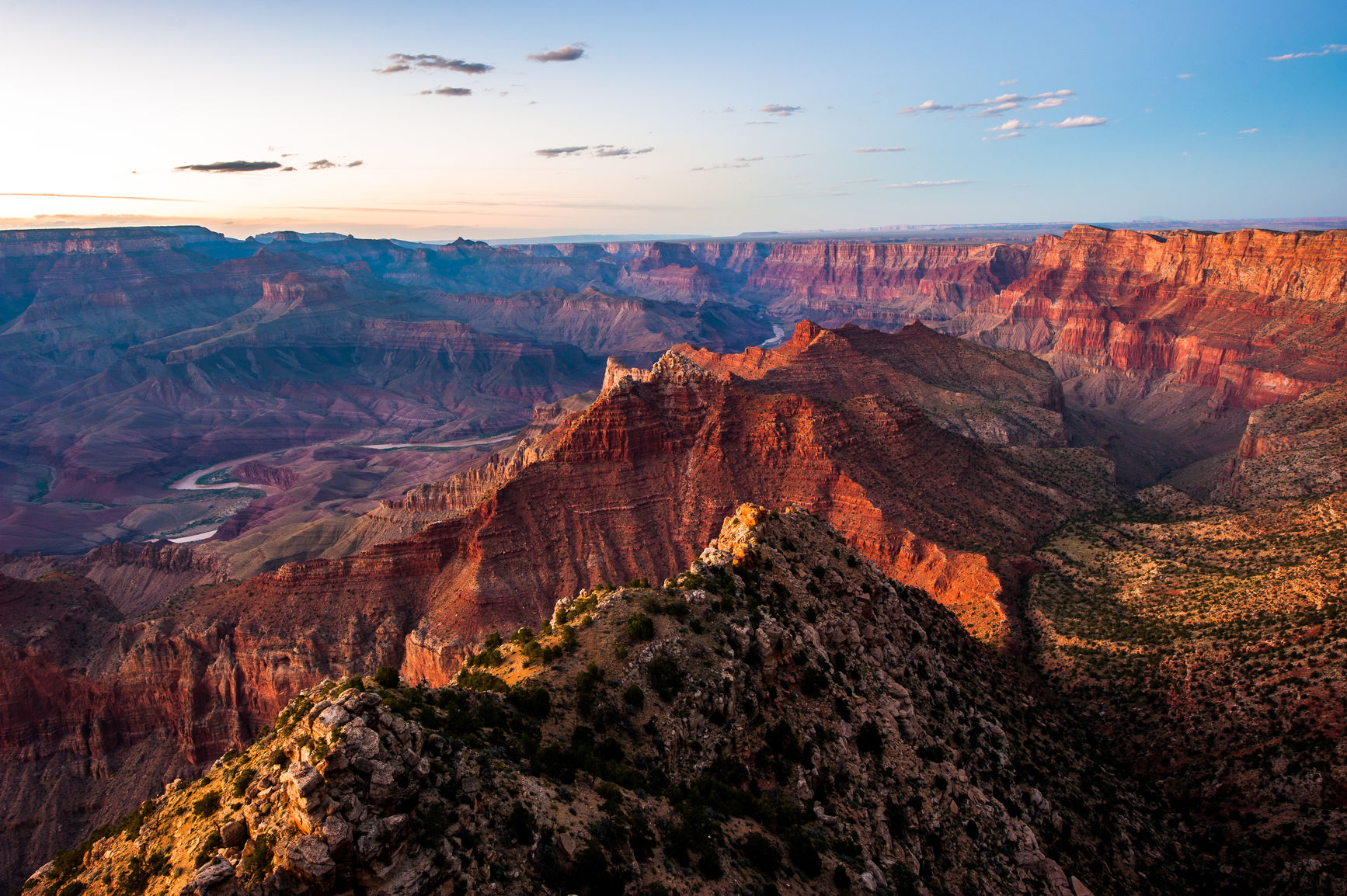 The United States of America can best be described with just three letters: BIG. From the soaring scenery to the super-sized power of its celebrity culture, America will have you in awe of it’s sheer scale.

And yet - it doesn’t seem to matter where you visit in the USA, the reception is always the same: Americans have a wonderful habit of making any visitor feel at home. The American identity shines through in their embrace of tourism and joy of showing off their nation. It doesn’t matter if they are serving you a hotdog in Boston, playing sax on the street in New Orleans or doing up your riding boots in Texas, they love to know where you’re from, and that you’re having fun!

New York: the sprawling concrete metropolis where every street corner seems to house some kind of iconic building or landmark. From the Empire State Building to the brownstones of Manhattan, from Central Park to Coney Island, the Statue of Liberty to views from 30 Rock, the Big Apple is like a pop-up book of famous places. It’s fast, busy, loud, huge and wonderfully overwhelming.

So, slow it down: start with the neighbourhood you’re staying in, and plan out day trips on foot or by their quick and easy subway system. Because the real heart of New York is in the little things: the hot dog stands on a city corner, your Yankees game memorabilia, a quirky basement bar, and the second-hand Jimmy Choos you found at the Broadway flea markets.

From the shadowy mountains of Yosemite, to the lush green forests and yawning caverns of The Big Sur, California offers a variety of national parks ideal for camping and taking a deep, fresh-mountain-air breath. If you love the outdoors but aren’t so keen on camping, opt instead to tour the Napa and Sonoma wine country for some incredible vistas and over 600 wineries peppering the winding roads. Try the ever popular V. Sattui Winery in St. Helena, or the boutique Antica Winery at Atlas Peak.

If you’re more of a beach lover, California is the place for you, too. You can almost hear the Beach Boys records spinning as you walk the cheerful shorelines of Santa Barbara, Santa Monica, Laguna Beach and Malibu. Californian beach towns are all about relaxing with good company as the sun goes down.

Texas is home to cowboy hats, hooting rodeos, sizzling BBQ and leavin’ the ‘G’ off just about everythin’. Go and watch the Texas Rangers play at the Rangers Ballpark if you’re there during the regular season (late March/early April to late September/early October), see the colourful beauty of San Antonio City, or count down 3-2-1 in the Space Museum in Houston.

Texans love a good party - try one of their many honky-tonk bars like Deep Eddy Cabaret in Austin, or Billy Bob’s in Fort Worth which specialise in country music. With the state packed with sprawling, dusty ranches, you can be a true cowboy (for a day) with a horseback tour of some of their wild and rocky landscape.

From the recent devastation of Hurricane Katrina to the sad history of slavery and poverty in the region, New Orleans has remained defiant and has not lost any of its shine. Completely unique to the rest of the nation, New Orleans fuses rich Creole culture with the Southern-hospitality of the past.

The streets by night shine with neon lights and the sounds of a saxophone - step inside any of their eateries along Bourbon Street and experience the inimitable food of New Orleans: Cajun crab, jambalaya, gumbo, po-boys and their mouth-watering take on the donut - ‘beignets.’

If you’re a history buff, Washington is for you. The list of iconic sights is extensive - there are national monuments, museums, parks and memorials all over the city. Along National Mall you will find the huge marble and bronze Lincoln Memorial, the ‘Stone of Hope’ Martin Luther King Memorial and the 555-foot Washington Monument - which, you can take an internal lift to the top for soaring views across the city.

If you’ve got the time, take a look at the one and only White House, or wile away the hours at the famous Smithsonian Museums, which houses everything from a 3.5 billion-year-old fossil to the Apollo moon landing module.

A natural wonder of the world, The Grand Canyon national park in Arizona is a slice of ancient history. Access to the Grand Canyon is plentiful. You can take a walking tour, or if you’re short on time a helicopter ride is a great alternative.

Disneyland Park is in Anaheim, California, and is one of the most popular tourist spots in America. From the Sleeping Beauty Castle to the iconic teacup ride, you will be whisked around from ride to ride, as you run into Prince Charming, Cinderella and The Little Mermaid. Let your inner child run wild.

When it comes to ski season in America, there is one destination that takes it very seriously: Salt Lake City, Utah. By day, test your skills on any of the surrounding mountains with some of the lightest, fluffiest snow your skis will ever touch. In the evening, enjoy the après-ski nightlife Salt Lake has to offer, with the twinkling lights of the lodges shining well into the night.

The iconic, Frank-Lloyd designed museum in New York City was originally called ‘The Museum of Non-Objective Painting’ when it first opened in 1939. This quirky, non-conformist attitude lives on today, with the museum a mecca for abstract art and modern art movements. Kooky, cool and a reminder of a time when art was so bold it could offend with being offensive, the Guggenheim is an homage to the great American spirit of artistic freedom.

Fenway Park in Boston is the undisputed home of American Baseball. The beloved venue, first opened in 1912, it’s the home to the iconic Red Sox baseball team and is the oldest ballpark in Major League Baseball. The stadium is a shrine to the game that has captivated the nation for over 100 years, with several museums on site worth a visit. If you are lucky enough to catch a game, don’t miss out on one of their famous chilidogs as you cheer on with the crowd.

Rising 167 feet into the air, the powerful Niagara Falls is a six-hour drive from New York City, and sits on the border of US and Canada. Take a spin around the base waters on the Maid of The Mist ferry, which boards in both countries.

The USA’s size plays to its advantage when it comes to weather - at any given time, there will be rain, hail and shine! Your destination and timing will ultimately determine the weather; however in general, it follows the seasonal trends of the Northern Hemisphere. This means the warmest time of year (and therefore the most popular) is between May and September; with the coldest time of year over the holiday season from November to February.

All travellers to the United States should ensure routine vaccinations are up to date at least four weeks prior to travel. These include tetanus and diphtheria, whooping cough, polio, measles, mumps and rubella and chickenpox.

It is recommended to speak with your doctor when planning your trip to find out which vaccinations you may need. Keep in mind that some vaccinations require more than one dose, so it is best to chat to your doctor well in advance of travel. Consult your doctor about vaccinations for hepatitis A and B, typhoid, rabies and Japanese encephalitis, depending on the type and length of your travel to Thailand.

An enormous country of busy cities, tourist sites and wilderness, always be careful with your bags and personal belongings. For specific advice, be sure to visit Smart Traveller before you leave for up to date information.

In case of an emergency in the United States, phone 911 for police, ambulance and fire brigade.

Always be on the safe side when you travel by taking out comprehensive travel insurance. Medibank Travel Insurance gives you leading hospital, accident and medical evacuation cover while you’re travelling. And with our comprehensive plans, you'll be covered for a host of other surprises like lost luggage, cancelled bookings and rental car insurance excess.*

Depending on where you go, America can be an expensive place to visit. Somewhere like Vegas or Disneyland is guaranteed to be expensive, whilst most of the major cities, thanks to programs like Airbnb, can be done fairly cheaply.

Credit cards are accepted throughout America, with ATMS and money exchange offices across the country.

Taking a long-haul flight? Here are your plane essentials