Fusing natural beauty with fascinating heritage, Vietnam has something on offer for every traveller. 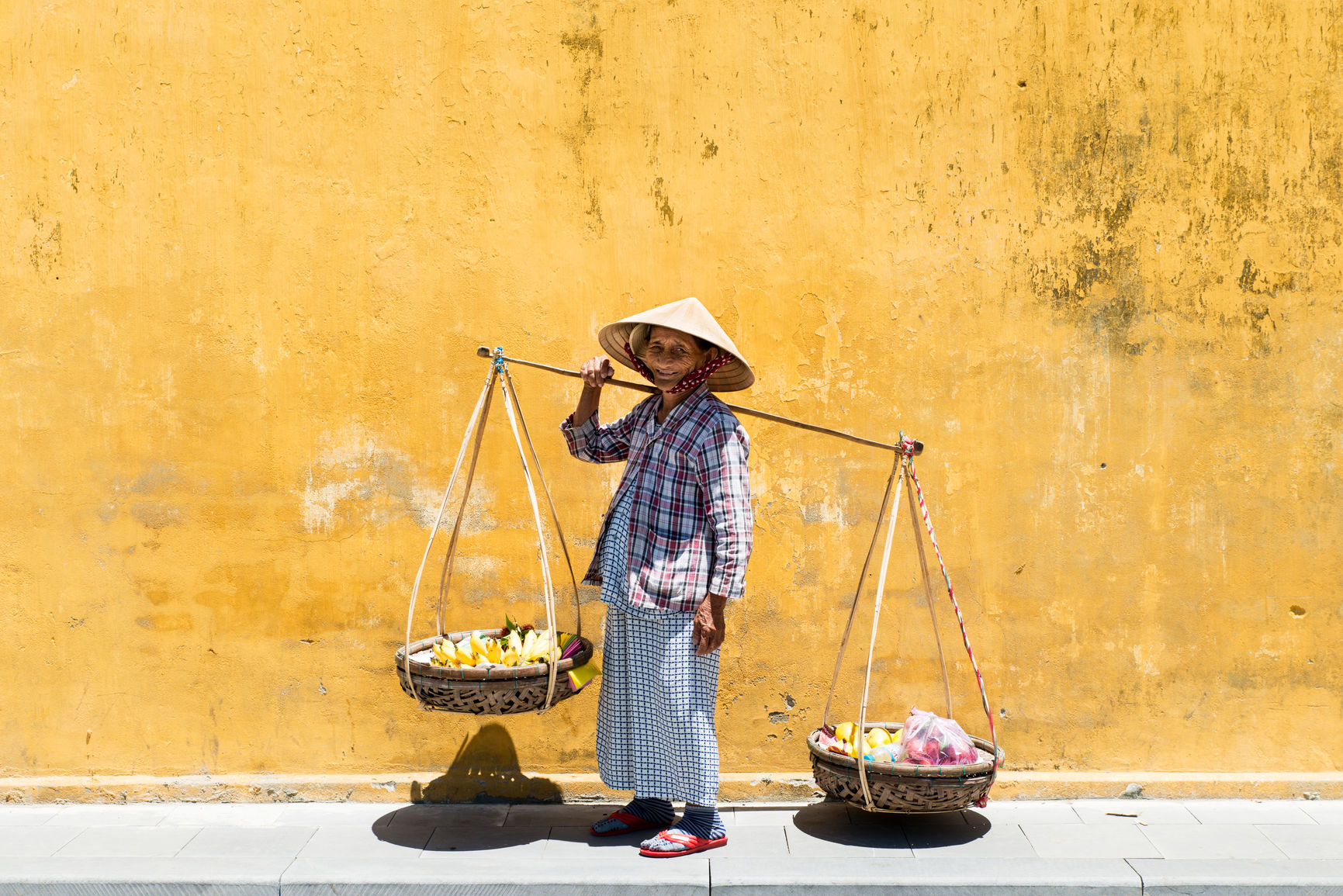 Even the most seasoned traveller will find something worth writing home about in Vietnam. This utterly beguiling country marries sublime natural beauty with a fascinating heritage that instantly draws you in. After the devastating effects of twenty years of war, it’s full of an energy, resilience and buoyancy that’s astonishing to witness.Throw in a cuisine that’s won the hearts of foodies the world over and a nation with an irrepressible zest for life, and you have a destination you’ll find hard to leave.

From the majestic Halong Bay, bustling old quarter of Hanoi and haunting mysteries of Hue, absorb the timeless beauty of Vietnam while exploring this fascinating land.

The old and the new fight for space in Ho Chi Minh City, Vietnam’s teeming hub of commerce and culture. A heaving mass of contrasts and chaos, it’s home to bustling marketplaces and glitzy boutiques, high-end restaurants and tiny food stalls, soaring development and age-old neighbourhoods. Everyone will find something for them in Ho Chi Minh City, whether it’s reflecting in the War Remnants Museum, poking around the French Quarter in District 1, sampling street food in the Ben Thanh Market or walking the abandoned corridors of the Reunification Palace.

Take time out from the frenetic pace with a generous serve of Ho Chi Minh City’s fabulous culinary scene. From dirt-cheap street stalls to fancy French bistros like we Hoa Tuc, it’s a feast of regional and world delights perfect for sustaining your city explorations.

Symbolic of everything that is graceful and beautiful about Vietnam, Halong Bay is a serene landscape of emerald green water punctuated with the majestic peaks of thousands of limestone islets. With a smattering of green forest cloaking the formations, it’s a breathtaking wonderland and not hard to see why Halong Bay was deemed a UNESCO World Heritage site in 1994.

It’s hugely popular with travellers year-round, and particularly so in the height of summer. On the bay itself there are plenty of attractions from kayaking, swimming and hiking. Or you can experience Halong Bay how the majority of visitors do, drifting around on old-fashioned junks, at one with the ancient landscape.

Hoi An is a timeless city of swaying lanterns, tottering timber shopfronts and a host of Chinese, Japanese and European architectural gems. Once a bustling port city in prime position on the Thu Bon River, Hoi An’s charm and grace reflect its noble heritage.

If you’re looking for a party, Hoi An isn’t where you’re likely to find one. While it’s not exactly a hotbed of excitement, just meandering through it’s atmospheric streets and soaking up the quaint beauty of the city is reason enough to visit. Take in the exquisite Japanese Covered Bridge, one of the most iconic symbols of Hoi An, suit up with a tailor-made ensemble from one of the many proprietors in town like Miss Forget Me Not and indulge in one of the finest culinary cities in the country. You shouldn’t leave without trying Hoi An’s signature dish Cao Lau at one of its world class restaurants like Lantern Town; a beautiful French-colonial building on the serene, red lantern-lit waterfront, or for a more local feel, Trung Bac in Tran Phu Street.

A sea of motorcycles zip along Hanoi’s wide boulevards, sophisticated restaurants and bars are springing up all over the city and there appears to be no end to the new swanky malls, boutiques and warehouses popping up.

Stroll the shores of Hoan Kiem Lake alongside morning t’ai chi participants, dive into the Old Quarter of Hanoi with a visit to Bach Ma temple and try your hand at Vietnamese cuisine with a local cooking class at Hanoi Cooking Centre.

Embrace the outdoors in the cool mountain air of Dalat, Vietnam, a unique hill station nestled in the Lang Bian Plateau. Once a favourite seasonal retreat for Vietnam’s European colonisers, Dalat’s hillsides are still peppered with villas and churches that provided welcome relief from the humidity of the cities.

A world away from the quintessential Vietnamese landscape, Dalat is all dense pine forests, rolling green hills and wide lakes. Dalat is known for its silk, fresh flowers and garden vegetables.

Originally a subterranean arms storage den for Anti-colonial Viet Minh, the legendary Cu Chi tunnels grew to cover over 250km of underground Vietnam throughout the war, becoming a hideout and transportation channel for the Viet Cong.

A fascinating site for travellers, you can visit the Cu Chi tunnels at either Ben Dinh or Ben Duoc, and head down to experience the dark, damp and claustrophobic conditions of life for the tunnel-dwelling fighters.

Stretching from the city limits of Ho Chi Minh City southwest to the Gulf of Thailand, this lush landscape is home to innumerable waterways that run through the flatlands.

Some of the magical sights in the Mekong Delta include trips to floating markets like the famous Cai Rang to feast on local fruits, spotting local kids hopping on the back of passing water buffalo and chilling out on the pristine sandy shores of the forested island of Phu Quoc.

Stunning Sapa Vietnam is a hillside station perched high on the edge of a plateau. It’s surrounded by sweeping mountains and cascading rice terraces, making for some seriously dramatic scenery.

The nearby mountains are dotted with local hill tribes who travel into Sapa dressed in their beautiful ethnic clothing selling local handicrafts and trinkets.

Decades of unbridled tourism have left their mark on Sapa, Vietnam, and while restrictions are now coming into play, there’s some concrete eyesores blighting the skyline. When a deep mist hangs over Sapa, filling its surrounding valley and shrouding the terraces, it’s still a spectacular sight.

The beach capital of Vietnam is hot on the traveller trail for its sublime setting, buzzing nightlife and abundance of resorts. On the south coast of Vietnam, Nha Trang is a beautiful mix of pristine beaches and fabulous diving, with nearby local mountains providing cool relief for day-trippers wanting a break from the sun. With health and wellness a growing reason for people to travel, yoga and meditation retreats are frequently run in Nha Trang, where an abundance of sunshine, natural beauty and a relaxed vibe set the scene for a welcome escape.

Weather in Vietnam varies significantly throughout the year. Hanoi to the north is monsoonal between April and September, with warm, humid conditions and rain, before heading into a cool, drier weather from October to March. Peak tourism season arrives with the cooler climate, tending to hover around high twenties from October and cooling to around 21°C in December and January. Summers in the north can nudge the mid 30°Cs.

The south of Vietnam overall is much warmer year-round, with distinctive rainy and dry seasons. December to late April is generally dry, with temperatures in the low to mid 30°Cs, while May through November is wet season. Expect temperatures in the low 30°Cs during the wet, with some areas in the Mekong Delta prone to flooding.

All travellers to Vietnam should ensure routine vaccinations are up to date at least four weeks prior to travel. These include tetanus and diphtheria, whooping cough, polio, measles, mumps and rubella and chickenpox. In addition, consult your doctor about vaccinations for hepatitis A and B, typhoid, rabies and Japanese encephalitis, depending on the type and length of your travel.

Cholera is a risk in Vietnam, although vaccination is not generally recommended, instead taking care with food and beverage selection is advised. With a medium malaria risk in Vietnam, discuss your travel plans with a doctor to ensure the most suitable precautions are taken throughout your trip.

It is recommended to speak with your doctor when planning your trip to find out which vaccinations you may need. Keep in mind that some vaccinations require more than one dose, so it is best to chat to your doctor will in advance of travel.

The tap water generally isn’t safe to drink in Vietnam, so stick to bottled water on your trip. It’s also advisable to avoid raw fruits and vegetables. Instead, opt for fruits that require peeling and fully cooked foods.

Overall Vietnam is a safe country for travellers, with most major hassles likely to be found out on the roads rather than at the hands of criminals. Having said that, be mindful of petty theft in large cities and keep an eye on your belongings in crowded tourist-dense areas. Traffic accidents and road deaths are high in Vietnam, so take every precaution when travelling in road vehicles. Be sure to check Smart Traveller before your trip to stay abreast of any changes in the travel advice.

While main cities and major roads are safe, those venturing deep off the beaten-track should keep a look out for undetonated explosives left over from the war, and never touch anything you may come across.

In case of an emergency in Vietnam, phone 113 for police, 115 for ambulance and 114 for fire brigade.

Vietnam has something for everyone depending on your budget. Those on a shoestring with delight in its dirt-cheap food prices, while travellers with deeper pockets will find a booming luxury travel industry to fit the bill. Generally, the provinces and rural areas are more reasonably priced than Hanoi and Ho Chi Minh City, but both are very affordable when compared to other countries.

You can get by with simple accommodation and local food for around US$40 per day, while mid to high end travellers are still looking at no more than US$100+ each day. Tipping isn’t expected in Vietnam, although where you feel the service exceeds expectations, especially for local tour guides, a small tip is most welcome.

ATMs are widely found across Vietnam, with the main cities offering cash withdrawals for Cirrus and Plus cash cards. Keep in mind more remote areas may not have access to ATMs so ensure you are sufficiently prepared.

Credit cards are accepted in main cities and tourist spots, they can be a convenient payment method in major hotels and an increasing number of restaurants. Visa and MasterCard are the most widely accepted credit cards in Vietnam.

Everything you need to know about travelling to China

More than just a stop over: Plan your trip to Singapore