The new national report card on Australia’s health is a confronting glimpse of what’s facing our health system over the next decade. This report should be a call to action on the power of prevention over cure.

Let’s start with the good news.

Australia has a very good health system compared to the rest of the world, however the new national report card on Australia’s health is a confronting glimpse of what’s facing our health system over the next decade. This report should be a call to action on the power of prevention over cure.

Some key findings include: 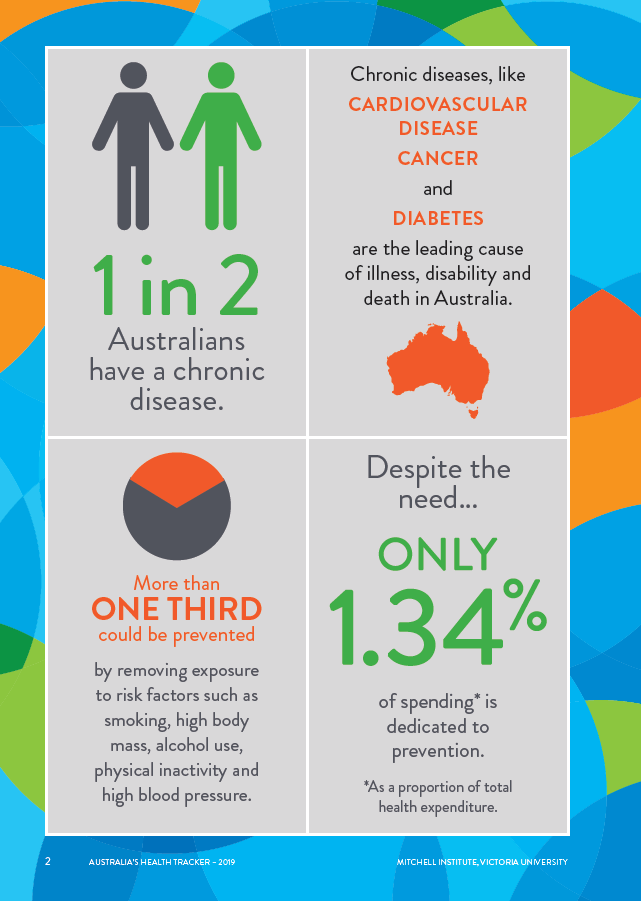 This is the second edition of the report card, with the first released in 2016.

The latest report shows that Australia is not on track to reach the health targets for improvement by 2025. In fact, many modifiable health behaviour risks are getting worse. Rates of physical inactivity, overweight and obesity (worryingly in children aged 5-11 years) and high blood pressure have all increased.

As we grapple with these challenges, health and medical research is vital to helping us understand the causes, finding optimal treatments and achieving better outcomes for patients.

This year, Medibank invested $1.6 million to support 30 active projects. We’ve partnered with more than 30 organisations to focus on key health priorities that impact the quality of life for millions of Australians and cost the health system billions each year - including osteoarthritis, low back pain, obesity and mental health.

An ageing population and an increase in chronic conditions are some of the biggest health challenges for Australia and the healthcare system. The number of Australians aged 65 and over is set to double within the next 40 years.

Whether you use the private or public system, these are issues that impact us all. And unless more is done to prevent and manage chronic disease, these costs will swamp both health systems.

In 2014 Medibank started working with governments and GPs to support Australians with chronic conditions. Back then we were supporting our customers by simply paying benefits toward their hospital admissions. But now, we’re using predictive data analytics to reach out to them before they get to this point. Medibank’s CareComplete program is now one of the largest health management programs in Australia and has enrolled around 30,000 participants and worked with more than 9,000 GPs.

The fact remains however, that Australia spends approximately 1.3% of the health budget on prevention despite more than 30% of the health cost burden being preventable.

We can all support our friends and families to move more, eat better, stop smoking and drink less.

This will significantly improve national health outcomes. As part of our commitment, this year Medibank launched the Live Better rewards program which incentivises people to champion their own health and wellbeing.