“Despite some challenges in the first half of 2020, focusing on delivering a better customer experience has continued to deliver growth in our business.

“Strong Service NPS for both Medibank and ahm has enabled us to maintain momentum in policyholder growth with a net increase of 11,700 resident policyholders in the first half, delivering an 8 basis point increase in our market share.

“Today’s result also reflects the continuation of the higher claims environment we saw in the second half of 2019 and the investment in customer benefits such as our new Members’ Choice Advantage dental network.

“The key driver of claims growth was a 6.4% increase in prostheses cost, which was responsible for 69% of the increase of growth in hospital claims. This is extraordinary given a subdued 1.1% increase in hospital utilisation for the half.

“We are continuing to manage affordability and claims through a range of initiatives such as payment integrity, contract management and in-home care and advocating for wider reform of the industry.

“The issues that exist in the private health system are well known and we continue to lead the way in driving more reform.

“While the Government has taken progressive steps in implementing reforms, which have had some positive impact on the system, there must be recognition that additional meaningful industry cost savings and enhanced industry participation can only be realised through new Government reforms.

“That said, Medibank and the broader health system, including payors and providers, have an ongoing obligation and challenge to remove unnecessary costs from the system to ensure the future sustainability of our world class health system.

“The expansion of our in-home care capability has seen 4,100 patients utilise hospital in the home or rehab in the home in the first half, of which more than 2,500 were Medibank customers.

“We have done this while taking costs out of our own business and introducing more value for our customers in our products.

“Our Health Insurance costs are down 9.6% for the half, meaning that we have delivered an additional $10 million in productivity savings over the last six months, and are on track for our full year target of $20 million.

“We are working hard within our business to address the challenges, but Government and the broader private health industry must play a meaningful role to ensure that additional reforms happen as soon as possible. An absence of reform this year could further deepen the prudential regulator’s concerns regarding the overall sustainability of the industry.” 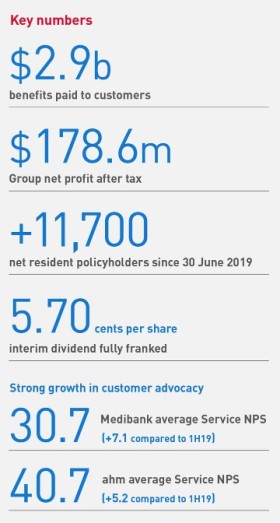 Net investment income $38.5 million, up from $4.1 million in 1H19 in line with benchmark indices

^ Numbers presented on a continuing basis unless otherwise indicated 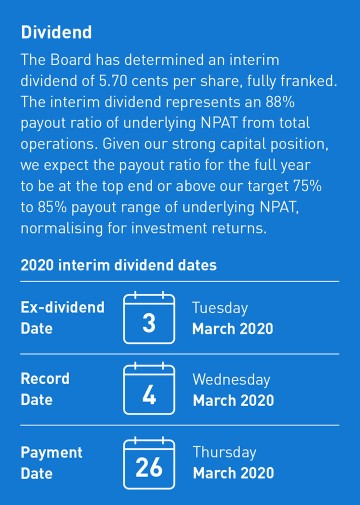 Group NPAT decreased by 9.0% to $178.6 million (1H19: $196.3 million). This was due to the reduction in Health Insurance operating profit, but partially offset by an increase in net investment income.

Health Insurance operating profit decreased 20.4% to $224.2 million (1H19: $281.5 million). This was driven by the continued higher claims environment and investment in customer benefits such as the new Members’ Choice Advantage dental network.

Premium revenue was up 2.3% to $3.3 billion. At a fund level, there was a net increase in resident policyholders of 11,700 or 0.7% in the first half, with improvements in the rate of acquisition and retention. Medibank retention continued to improve supported by the Live Better rewards program and Members’ Choice Advantage dental and optical networks. The ahm brand continued to grow, with policyholder growth of 4.2%.

Net claims increased by 5.9% to $2.8 billion due to a $151.9 million increase in claims expense and a $6.8 million reduction in risk equalisation receipts. Hospital claims were 6.0% higher with growth in prostheses the major driver. Extras claims were 5.6% higher, driven by investment in the Members’ Choice Advantage dental network, although this growth was partially offset by lower growth in natural therapies following regulatory reform.

Management expenses decreased by 9.6% to $248.1 million, with the management expense ratio (MER) improving from 8.5% to 7.5%. We are targeting $50 million of productivity savings across the next three years and we are on track to deliver $20 million in savings in FY20.

Operating profit was up 5.6% to $13.3 million. Medibank Health revenue was up 18.1% to $128.6 million (1H19: $108.9 million), which includes a full six months of contribution from Home Support Services (acquired in August 2018) and the new Live Better rewards program (launched in August 2019). Management expenses increased by 12.5% which includes additional investment in the home care business and Live Better, partially offset by $4.0 million in cost savings.

For a complete list of all ASX announcements, please visit our Investor Centre.