These captivating films will have you racing to tie up your laces and hit the pavement. 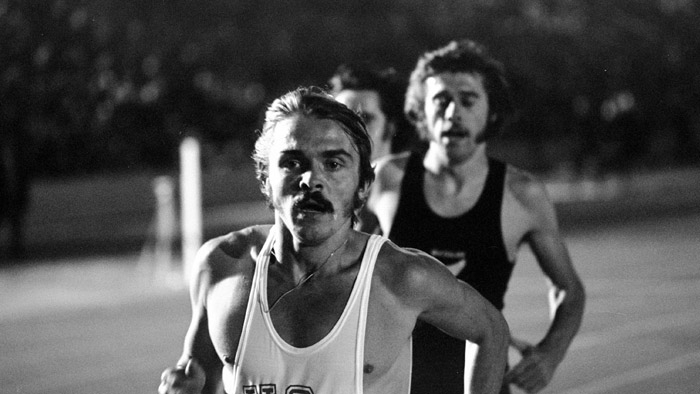 Three years, two months, 14 days and 16 hours is the length of Forrest Gump’s run in one of the most iconic scenes of the film. Literally running from his past across America, Forrest (Tom Hanks) amasses a crowd of followers and national media interest in this simple and powerful portrayal of the catharsis of running. 15,248 miles later, he turns to go home.

Released as ‘Lola rennt’ in Germany, Run Lola Run opens with Lola (Franka Potente) receiving a desperate phone call from boyfriend Manni (Moritz Bleibtreu) telling her he has lost 100,000 marks belonging to his crime boss. Trying to save the situation, Lola embarks on a series of epic ‘runs’ through three versions of a scenario that start out the same but develop differently throughout. From an animated Lola running down a spiral staircase to the actress hurtling through streets of Berlin, this fast-paced film experiments with a variety of cinematic techniques and employs a high-energy, pulsing soundtrack for a thrilling ride.

“Let me tell you something, all of my life people have said to me, ""You're too small, Pre. You're not fast enough, Pre. Give up your foolish dreams, Steve!"" But you know what, they forgot something: I have to win.” And this is why Steve Prefontaine is the stuff of running legend. Documented in this classic running drama, ‘Prefontaine’ is a documentary-style film exploring Pre’s journey as an athlete, the fundamental role of his coach Bill Bowerman, who also co-founded Nike, and the pursuit of his Olympic dream in Munich.

This four-time Academy award winning film is based on the true story of two men running in the 1924 Paris Olympics. Eric Liddell, a devout Christian Scotsman and Harold Abrahams, a Jewish Englishman are motivated by very different aspirations and their journey to the Olympics is explored in beautiful detail throughout the film. For Liddell, running is about feeling divinely inspired, for Abrahams it represents an opportunity to be accepted. The pair return from Paris triumphant, upholding the belief that devotion, sacrifice and commitment led to their running success.

“We’re going streaking! We’re going streaking through the quad and then to the gymnasium!” And so begins ‘Frank the Tank’s’ frat party nudie run, setting off car alarms and frightening dog walkers in the crazy American comedy Old School. While the sight of a naked Will Ferrell sprinting down the road is comedy gold, getting pulled up by his wife and her friends driving past is the icing on the cake to this kooky scene. “Frank, get in the car! Now!”

Paulie Bleeker’s mustard and maroon jogging outfit is almost a character in itself in the hit comedy-drama Juno. Starring Michael Cera and Ellen Page, pivotal moments in the film take place when the geeky Paulie is out jogging including when Juno tells him she loves him, when he first feels their baby kicking and when he confesses to trying really hard to look cool. Those bright gold shorts have inspired their own fan following and the outfit is now listed to purchase on Etsy.

- Chariots of Fire’s name came about after screenwriter Colin Welland was listening to BBC’s religious music series one Sunday evening and heard the chorus to William Blake’s ‘Jerusalem’… “Bring me my chariot of fire.”

- Bill Murray, John Travolta and Chevy Chase all turned down the role of Forrest Gump.

- Tom Hanks’ younger brother Jim Hanks doubled for him in many of his running sequences in Forrest Gump.

- The box of orange tic tacs Paulie eats from in Juno is actually empty, after actor Michael Cera struggled to say his lines with a mouthful.

- When Frank is streaking next to his wife’s car, you can see the lights and camera attached to the car in the store windows. Film goof!

The history of the treadmill